David Kronsteiner and Tim Smith were selected by the Oregon Invasive Species Council to receive the Protect the Northwest Award 2012. This award recognizes companies that make a difference in protecting Oregon from invasive species. West Coast Contractors was recognized for its prompted and proactive work in cleaning the hulls of construction barges to prevent the spread of aquatic invasive species during the construction of the NOAA Pacific Fleet Headquarters in Newport, OR. 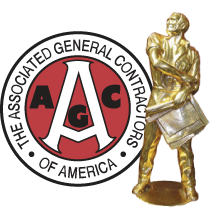 President David Kronsteiner of West Coast Contractors is the 2011 recipient of the prestigious SIR award bestowed by Associated General Contractors of America. The SIR award (Skill, Integrity and Responsibilities) is one of the highest honors in the construction industry today and acknowledges individuals, organizations and agencies in Oregon and Southwest Washington for their exceptional performance and production. Kronsteiner is widely recognized for his contributions, loyalty and hard work in the construction industry. Under his leadership, West Coast Contractors has tackled challenging construction assignments with skill, speed, and a can-do, solution-oriented attitude. David's commitment to excellence extends far beyond West Coast Contractors. Kronsteiner supports the Boys & Girls Clubs of America and serves as the President of the International Port of Coos Bay.