The Port of Brookings Harbor

The tsunami that washed ashore in Japan during March of 2011 also damaged west coast ports, most notably Crescent City Harbor in northern California and the Port of Brookings Harbor in southern Oregon. Working with FEMA funds, the Port of Brookings Harbor contracted West Coast Contractors (WCC) to replace a damaged sheet pile wall and concrete dock in the bay. This dock is vital to the local economy, as it provides a location for local fishermen to unload their catch and transport to market.

The repairs included removing underwater rock, logs, debris, old sheet piles, and even an old sunken barge from the shoreline, using a clamshell bucket attached to a crane as well as a long-reach excavator. To accomplish this work, WCC called in professional divers to assist in the removal of the objects. After the debris was removed, WCC installed a 60-foot sheet pile wall along the bay. As part of the construction, WCC drilled 40 feet into the shore to install tiebacks to prevent similar damage in the future. Once the wall was in place and backfilled, a new concrete dock was built and now, with a stronger foundation, functions for both commercial as well as recreational usage in the town.

Due to FEMA funds, swift tides, a narrow in-water work window, and the opening of crab season, this job was closely monitored and highly visible. WCC completed this project on schedule with outstanding results, satisfied port officials and happy fishermen in January of 2012. 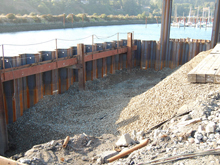 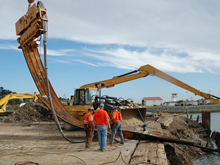 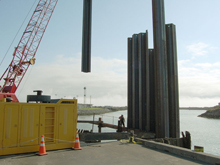