Coquille Plywood Plant
RFP began updating its plywood manufacturing plant in Coquille, Oregon in 2015. WCC drove 51 steel piling to depths of up to 87 feet to provide a foundation for the new equipment. Site conditions required WCC to bring in the Kobelco CK1600 crane, rated for 160 tons, equipped with 150 ft. of standard boom and 60 ft. of jib for a total of 210 ft.

Earlier in the year, WCC provided similar work in another portion of the plant, driving 47 piling to a depth of 85 feet.

North Bend Chip Facility
RFP ships about 1.5 million tons of softwood chips from its North Bend Chip Facility annually. In 2014 there were 34 ships and 25 barges loaded with chips, which are transported to RFP's longstanding customer base in Japan for the purpose of paper production. WCC has performed many construction repairs at this facility; working on the Chip loading boom repairs in the summer of 2015 and repairs to the wooden wharf due to damage caused by errant barge in March of 2015. 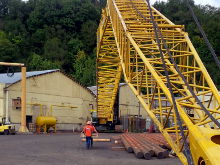 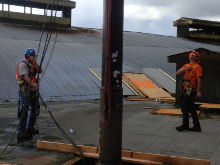 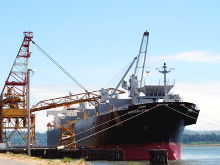