As one of the few crane operators on the Oregon Coast, West Coast Contractors is called out to do a variety of jobs involving crane service. WCC has 7 cranes, ranging from 60 ton to 160 ton, and boom lengths up to 300 ft. If specialty equipment is needed, WCC has an extensive list of equipment rental companies to draw from.

The 65-foot F/V Helen McColl, a 99 year-old wooden salmon troller, sank in the bay at Newport in November of 2009. After initial efforts to raise the vessel failed, WCC was called in February, 2010 to remove the boat from the bottom of the bay. As WCC was already performing work in the bay, this was a very cost effective solution for the Port of Newport. The salvage operation was performed with WCC's 160 ton crane sitting aboard our barge. This is one of many projects that WCC has helped the Port of Newport with over the years. 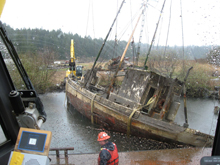 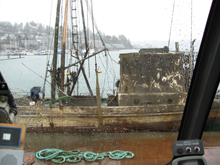 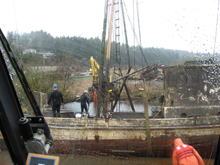