East Evans Creek runs through the small community of Wimer about 10 miles north of Rogue River, Oregon. A few miles upstream from Wimer, a small bridge crosses the creek at Murphy Gulch. The Bureau of Land Management (BLM) owns the Murphy Gulch Bridge, which is used by logging crews working on nearby forest lands, along with local residents. Winter flooding of East Evans Creek often times covers the bridge, making it impossible for logging crews and residents to cross. The BLM put this bridge out to bid in 2020 when West Coast Contractors (WCC) was selected as the contractor in a competitive bid process.

The existing bridge, a single lane concrete structure, was about three feet above the creek. It was built in 1961 as a seasonal logging road without guardrails to allow debris to flow over it easier. At that time, only two people lived across the road. Now dozens of residents depend on the bridge daily.

WCC will replace the small, aging structure with a much larger bridge sitting about 16 feet higher than the original. Concrete abutments will be constructed on either end and 135 ft. concrete beams, each weighing 140,000 lbs, will be set on the abutments. As the new bridge is much higher, fill will be brought in as a base for the new road, which will extend 200 feet on either end of the bridge. The beams will form the base for the road, which will be paved on both sides of the bridge for about 200 ft.

WCC expects to have the project completed in the fall of 2021. 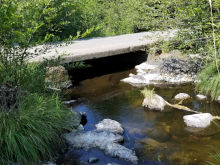 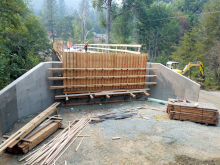 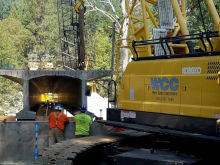