When the portion of California State Highway 197, which crosses over Sultan Creek near Crescent City, California failed, CALTRANS decided to replace the current culverts with a section of bridge. When culverts need to be replaced, bridges are the preferred structure as they greatly enhance fish passage.

General Contractor Hemmingsen Contractors of Crescent City was selected to perform the emergency repairs. As West Coast Contractors has built a reputation for bridge work throughout Northern California, Oregon and Washington, Hemmingsen called on WCC to take care of the bridge section while they provided other portions of work.

The project consisted of temporary shoring along Sultan Creek, excavation and removal of the old culverts, then constructing the cast-in-place bridge and bicycle rail. Although the section of highway was under traffic throughout the project, work was performed at a fast pace. The narrow road and overhead power lines added to the complexity of the job.

Throughout the job, Project Manager and Superintendent Tom Koenig did an outstanding job coordinating work between Hemmingsen, subcontractors and multiple public agencies.

The General Contractor, Caltrans and the fish were very happy with the results of the project. Caltrans has since called WCC back for other emergency repairs. 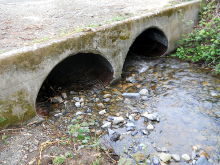 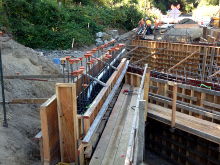 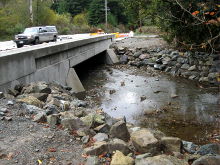