West Coast Contractors (WCC) of Coos Bay has begun foundation work for the latest renovation phase of the historic Liberty Theater in North Bend. Phase II of the renovation will involve expanding the building to the south to accommodate ADA restrooms. WCC will be constructing a concrete wall along the south edge of a lot adjacent to the theater to allow excavation for the addition.

West Coast Contractors, with over 50 years' experience in the area, is an expert at constructing foundation and shoring systems. This construction will involve a method known as Auger Cast Piles. WCC Vice President Lonnie Kronsteiner explains "We will use an auger to drill 16 inch diameter holes to a depth of 18 feet, creating an underground wall. Steel rebar cages will be set into the holes, which will be filled with concrete. Excavation will then take place, exposing eight to nine feet of the wall. A finished concrete face will be added to the wall after excavation." A total of 23 piling will be set on the site.

The Liberty Theater, originally built in 1924, sits at the corner of Sherman and Washington Avenues in North Bend. It has been a landmark in North Bend for over 90 years, and currently houses the Little Theater on the Bay. Although the building has deteriorated over the years, fundraising efforts aimed at restoration are going well. This is the second of seven phases planned for the restoration, which will span several years. Phase I, completed last year, put a fresh coat of paint on the building along with other exterior repairs. Local architects McSwain and Woods are overseeing the restoration.

West Coast Contractors is pleased to help with the restoration of this historic landmark. 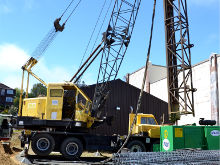 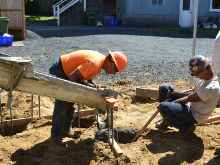 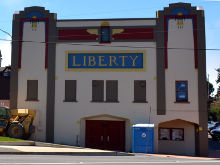