West Coast Contractors performed work on a new high-profile development in the Central Eastside area of Southeast Portland at SE 11th and Belmont streets. Killian Pacific Development of Vancouver, WA and architect Ankrom Moisan of Portland have designed a mixed-use development including 247 apartments and 97,000 square feet of retail space for the two block area. The project has a unique design and will include a number of distinct structures, separated by a series of alleys and streets.

Killian purchased the property in 2000, but the lot has been vacant since 2002 when fire destroyed a restaurant and two warehouses. In 2012, a herd of goats was brought in as an eco-friendly way to control the vegetation. They soon became a favorite attraction in the neighborhood, and the property became known as "The Goat Blocks." The development is being called LOCA@The Goat Blocks, with LOCA being a multiple pun on local, locavore and crazy.

Andersen Construction of Portland was chosen as the General Contractor for the project. Andersen, who has partnered with WCC multiple times in the past, asked WCC to provide access to the underground parking structure. Because the lower parking area is below the water table, WCC needed to build a cofferdam around the perimeter of the area, then after excavation was completed, pour a concrete seal as a barrier to groundwater. In order to overcome the upward hydraulic pressure of the groundwater, the seal totaled 3200 cubic yards, or 320 truckloads of concrete, and is up to 7 feet thick. As the seal was entirely underwater, a specialized tremie pour was used, while excess water was pumped off as the concrete was poured. Because of the large number of trucks involved, the concrete was poured during the nighttime hours to avoid traffic.

The goats have been relocated to a nearby lot, and are still available for viewing. You can follow them at www.thebelmontgoats.org. 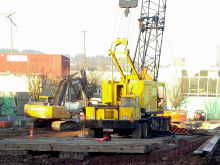 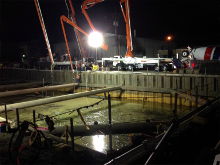