WCC has a longstanding relationship with Chevron to do repairs and maintenance at the fuel unloading facility at Humboldt Bay near Eureka, California. The harsh weather conditions, along with wear and tear from the fuel unloading operations create an ongoing need for maintenance to the facility. Over the years, we have dredged the bay, replaced mooring dolphins and have made repairs to the 600 ft. pier which handles the barges. Due to the sensitive habitat in the bay, the repairs need to be spaced out over multiple years.

During the summers of 2016 and 2017, WCC performed seismic retrofits to make the wharf more tolerant to potential earthquakes. The repairs included removing sections of the existing structure and replacing with a new prefabricated seismic platform structure and underpinning of the existing cargo lines. Several piles and pile caps were replaced along with moving, securing and replacing piping, valves and conduits for the many services involved. In 2014 and 2015, WCC performed additional repairs to the pier, replacing damaged and deteriorating piling and supports along with removing unused wooden piling.

During the summer of 2018, WCC was be back at it, making additional seismic upgrades.

WCC is one of the few contractors in the area to meet Chevron's high safety rating administered by ISN, who prequalifies contractors based on their safety programs. This assures Chevron that we have met the rigorous safety standards required to contract on their jobsites. 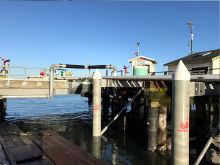 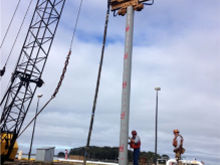 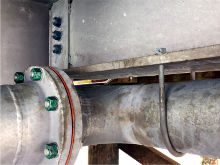