Lakeport, California, midway between Eureka and San Francisco, sits on the shore of Clear Lake, the largest lake wholly in California. Library Park, in the center of the 5,000 person community, is the central activity hub of the town with picnic tables, BBQ pits and boat ramps. The winter of 2017 was a harsh one for Northern California. The storms caused Clear Lake to undermine the seawall at the edge of the Park. In 2019, The Federal Emergency Management Agency (FEMA) awarded the City a grant to have the damages repaired. West Coast Contractors (WCC) was awarded the project in a competitive bid process.

WCC's work consisted of constructing a 534 foot sheetpile wall to replace the existing crumbling concrete structure. 25 foot sheets were driven along the edge of the current sidewalk, then were topped with a concrete cap. Docks for the boat ramps on 1st and 3rd streets were reattached and utilities to the docks relocated as needed.

WCC was pleased to work with the City of Lakeport and its citizens. WCC's portion of the complete at the end of March 2020, in time for the heavy tourist season throughout the summer months. 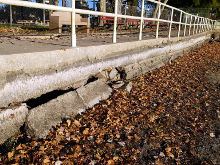 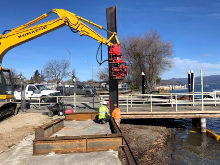 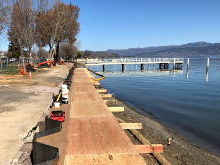