In 2013, West Coast Contractors (WCC) was called on to provide the Marine Construction at Lower Granite Dam on the lower Snake River near Pullman, WA. WCC worked as the major subcontractor for a joint venture between general contractors Garco Construction, based in Spokane, WA and Total Site Services (TSS) based in Richland, WA.

As overseers of dam operations, the Army Corps of Engineers has partnered with the National Oceanic and Atmospheric Administration to create the Juvenile Fish Transportation Program which works to ensure the continued survival of fish species native to the Snake River. The program incorporates barges and trucks to transport migrating fish downstream to the Pacific Ocean.

The project is to buid a new wharf to handle the increased numbers of barges added in recent years. In order to minimize the risk of disturbing fish populations, WCC needed to complete all water-based construction between December 15th and February 28th. They moved equipment to the site and begin the upland portion of work in November 2013, utilizing 90, and 160 and 200 ton cranes.

A total of thirty two 54-inch diameter metal casings were driven into the floor of the river to a depth of 40 feet. Pacific Foundation of Vancouver, WA drove inside the casings further into the bedrock, which were then filled with concrete to establish a solid foundation for the wharf. Precast, pre-stressed concrete pile caps and slabs were set on top to complete WCC's portion of the work. TSS/Garco finished the structure with a layer of concrete and added all utilities and railings. Additionally, WCC constructed a mooring dolphin atop a 15 foot diameter casing that was anchored with a similar process. 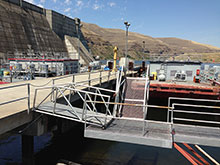 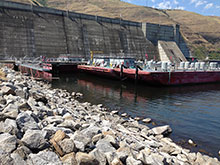 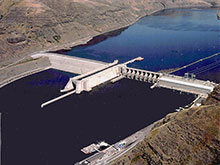