Recorded history indicates there have been at least 22 serious floods on the Napa River since 1865. After a severe flood in 1986, the US Army Corps of Engineers and the Napa County Flood Control and Water Conservation District worked together to design the Napa River Flood Project, which passed voter approval in 1998. This design called for a new type of flood control referred to as the "Living River Principle", reducing flooding in the Napa area while generally maintaining the river's original flow, natural slope and width. One phase of the project is known as the "Napa River Dry Bypass". This innovative phase was designed to provide an overflow area to channel floodwaters, but will be used as an open public use area near downtown Napa the remainder of the time.

General contractor Nordic industries, based in Olivehurst, CA, was contracted for the excavation and earth work on the 1300 foot bypass, including installing terracing, colored pavement and a flexible concrete cellular block system to protect the side slopes of the bypass area. Due to their expertise in marine construction, Nordic called on West Coast Contractors (WCC) from Coos Bay, OR to install sheet pile walls at the river's edge. Permanent walls were placed to prevent erosion of the river bank, while temporary cofferdams were set in place to hold back the river so necessary work could take place near the shore. WCC completed this project in January, 2015.

West Coast Contractors also performed work in the summer of 2013 installing the nearby Main Street Boat Dock. WCC was pleased to work with the residents of the Napa area on both these projects. 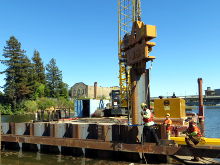 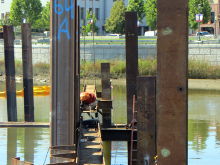 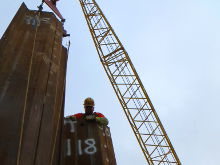