West Coast Contractors was contracted by the Lincoln County Public Works Department for road work on Old River Road in the city of Siletz, located in the Coast Range of Lincoln County, Oregon. A 500 foot section of Old River Road running along the Siletz River had slipped due to years of erosion and heavy rains, rendering it impassable. With over 50 years of project experience, WCC is deployed their extensive line of heavy equipment to repair the slide and permanently stabilize the hillside below the road.

Because the portion of Old River Road runs tightly against the bank and is on a steep incline, this created an extra challenge for the crew and equipment as the narrow workspace will made it difficult for the heavy equipment to maneuver. The section of roadway required shoring and filling and a two-tiered, soldier-pile retaining wall consisting of over 100 H-Piles and pre-stressed concrete lagging panels were constructed to stabilize the slide. WCC partnered with Malcolm Drilling, one of the nation's distinguished foundation contractors, to drill into the rock to anchor the piling and tie-backs, giving the area of road the support needed to prevent slides in the future.

This project was successfully completed in the fall of 2013, coming in on time and under the $1.8 million budget. 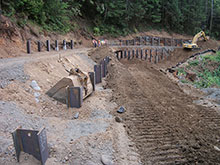 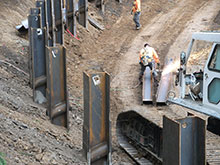 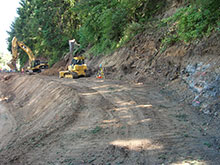