The Federal Highway Administration (FHWA) has employed the expertise of West Coast Contractors to replace two bridges in the Six Rivers National Forest of Northern California. The project started in April 2013 and is now completed with the exception of planting to be done in the fall of 2014. Located 20 miles from the coastal town of Crescent City, CA, the South Fork Smith River Road project encompasses the replacement of the Steven Memorial Bridge that expands over 470 feet, and the Hurdy Gurdy Creek Bridge standing at 190 feet. In the case of these two bridges, they are both single lane, while present highway safety measures require bridges to have at least two lanes.

WCC has been in partnership with the FHWA since the beginning of the project, which approved finalized design plans and collected permits needed when work began in the spring of 2013. The work schedule has been tight with both bridges under construction at the same time. Because of winter conditions and environmental requirements that ensure the rivers are kept free of dirt and silt, WCC's in-water work window only spans from May to October. Due to the amount of work to be accomplished, WCC needed to stop work in the fall of 2013, and begin again in the spring of 2014. In preparation of these rigid timetables, WCC implemented its Project Control System which includes regularly scheduled meeting times throughout the planning and construction phases, to meet each important target date. 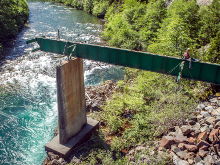 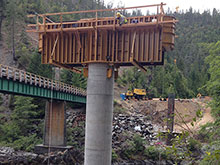 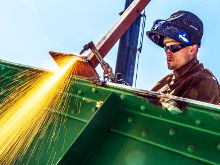