The US Forest Service maintains an estimated 380,000 miles of roads on federal land in 44 states. These roads provide access to Forest Service land for timber harvest, fire control and recreation. On those roads over 7,000 bridges are in place crossing rivers, creeks and streams.

The Salt Gulch Bridge crosses Horse Creek in Siskiyou County in far northwestern California, about 30 miles northwest of Yreka. Built in 1959, the aging bridge has damage to the abutment at the south end. West Coast Contractors (WCC) was chosen to make repairs in a competitive bid process.

The repairs consist of driving piling on either side of the bridge and sliding steel beams under the bridge, resting on the piling. The abutment will then be removed and rebuilt using reinforced concrete. This will be tied into two 36" shafts drilled 38 feet into the rock and filled with reinforced concrete. The road meeting with the bridge will then be rebuilt, the temporary supports removed and traffic will resume.

In addition, WCC will be replacing eight culverts in the area, ranging from 36" to 90". The culverts channel water as needed to prevent erosion of the roads.

WCC expects to have the project completed in the fall of 2021. 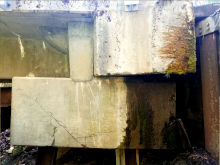 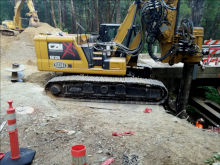 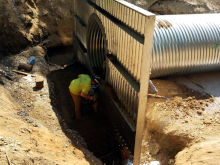