The Lane County Public Works Department partnered with West Coast Contractors (WCC) to replace a quarter-mile section of Sweet Creek Road near Mapleton, OR. The road connects nearly 70 homes and thousands of acres of timberland to Mapleton and the Highway 126 corridor. The section of roadway in question was originally constructed decades ago, but problems with its initial design and its close proximity to a bend in the Siuslaw River had made it susceptible to major weather damage and deterioration over the years.

The original section of Sweet Creek Road was created by dynamiting a rock face next to the river, then building the road on top of the rubble. Heavy flooding and weather conditions over the years finally caused the lane closest to the river to completely slip down the banks. The road had been reduced to a single lane, controlled by traffic signals at either end. WCC, working closely with Lane County and its Engineers, made substantial design changes on the project when unforeseen complications came to light. The original design called for a retaining wall to support the road, but plans were revised after the project was already underway to instead build a bridge over the unstable section of land. This substantially altered the scope of the project, but with WCC's expertise and flexibility, the construction time was not affected substantially.

WCC implemented state-of-the-art construction techniques that assure an improved design for years to come. WCC employed the help of subcontractor Pacific Foundation of Vancouver, WA for necessary drilling into the rock foundation so pilings could be set to support the bridge structure. 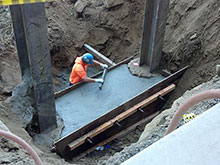 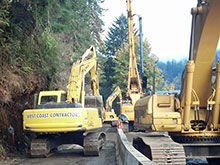