In the far northeastern corner of California, just inside Modoc County, the community of Adin straddles State Highway 299. The aging bridges at Ash Creek and Butte Creek, originally built in the 1920's, were in need of replacement when Caltrans put the project up for bid in late 2018. West Coast Contractors (WCC) was the successful bidder on the project and began work in the spring of 2019.

The new Ash Creek Bridge, at 150 ft, consists of three 50 ft sections. Concrete abutments on either end consist of twenty 40 ft H piles, while the center piers each utilize four Cast in Steel Shell (CISS) piling, 30" x 90 ft. The new bridge over Butte Creek is a single 50 ft section resting on concrete abutments built around twelve 40 ft H piles on each end. Preformed concrete planks rest on the abutments and piers, topped with a concrete deck and a polymer finish layer.

Because traffic needed to remain flowing, one side of the bridges were demolished and rebuilt while traffic flowed on the opposite side. Both bridges were built simultaneously over two construction seasons, wrapping up in the fall of 2020. 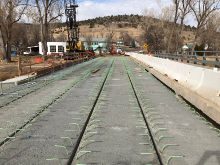 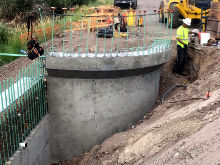