West Coast Contractors (WCC) was busy during the spring of 2017 performing emergency repairs in Southern Humboldt County for the California Department of Transportation (Caltrans). The unusually heavy rains during the winter created several slides and eroding stream banks. Because of our experienced personnel, quality workmanship and understanding of the local terrain, Caltrans calls on us often for emergency repairs. Below are a few of the repairs WCC worked on during the spring of 2017.

Heavy rains throughout the winter caused the Eel River to flow higher and faster than usual. This created substantial bank erosion, undermining the historic Fernbridge on Route 211 north of Fortuna. WCC was on site stabilizing the bank and placing rip rap to prevent further erosion.

A failed culvert under route 254 near Miranda resulted in bank erosion and the road sliding. WCC needed to replace multiple aging galvanized culverts under the road to make temporary repairs. New PVC culverts were used as replacements during the project. Later in the summer, WCC built two soldier pile walls to shore up the road.

When a section of Highway 101 began sliding due to a saturated hillside, Caltrans asked WCC to help the general contractor to provide a sheetpile shoring wall to stabilize the highway. Our excavator-mounted vibratory hammer is perfect for jobs such as this.

Because of our crane experience, Caltrans asked WCC to assist another contractor in placing rip rap along a section of Salmon Creek Road near Miranda. Heavy rains had caused bank erosion of Salmon Creek, putting the road above in danger of sliding. WCC brought in a crane to place over 7000 tons of rip rap over a four week period to stabilize the bank and prevent further erosion. 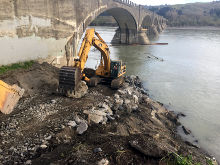 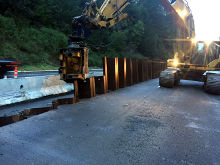 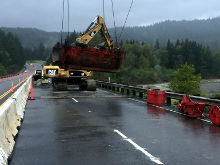