In March of 2016, West Coast Contractors (WCC) was awarded a contract to build two bridges for Weyerhaeuser Corporation on their 174,000 acre Millicoma Tree Farm near Coos Bay, Oregon.

The two bridges utilize precast, prestressed concrete beams 150 feet long by 5.5 feet high. Bridge 4 is 210 feet long with the beams resting on 5 foot diameter columns which were drilled to a depth of 40 feet, 15 feet of which was drilled into solid rock. The forms were then filled with rebar and concrete to form the columns. On each end, 30 foot cast-in-place slabs rest on abutments utilizing driven piles. Bridge 5, at 150 feet, rests on similar abutments at either end.

The bridges were built to restore the natural path of the Millicoma River, which was diverted in the 1950's. At that time, the existing timber frame bridges were eliminated at an 'oxbow' section of the river and the channel filled in. When it was discovered that the river path made it difficult for spawning fish to navigate, Weyerhauser worked with the Coos Watershed Association to make plans to restore the river's original path.

In order to meet the strict in-water work period, WCC had this project on an accelerated 3 month schedule with both bridges being constructed simultaneously.

WCC is pleased to have worked with Weyerhaeuser and the Coos Watershed Association on this project to help restore historic fish runs on the Millicoma. 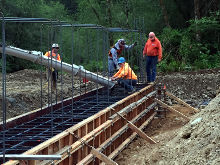 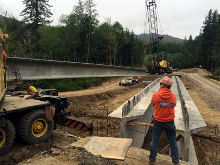 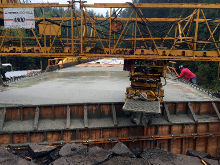